It has gotten so hot outside that a few people have had their tires to blow out on them. Although I think climate change is a real thing; it is normal to have very hot weather here during the summer. Last summer, there were fires and all sorts of problems out west. We had a mild summer. Temperatures rarely got out of the 80s which is unusual here. Funny how the ocean currents in the Pacific El Nino and La Nina have such an effect on our weather.

All the same, I hate 100 degree weather.

We have had a few evening thunder storms which is typical. With central heat and air, we have a bit of a buffer between the weather outside and my memories of summer as a child. No matter where you stood in the house I grew up in, you could look out a window. Houses were built to stay cool and circulate air. I remember during the day, curtains were drawn to keep sunlight out. Windows were open to keep the air moving. Large shade trees cooled the house in the summer.

With their leaves gone in winter, sunlight heated the house. We all gathered in the kitchen for most of day during the winter. At one time, kitchens were a separate building outside the house. So if you had a fire in the kitchen, the entire house did not burn as a result. At night you covered up well with blankets and quilts to stay warm. Bedrooms were not heated. I remember very old people who would crawl under their homes to turn water off if the temperatures were going to be below freezing for a long time. No one wanted busted pipes.

My favorite memory as a child was running around shutting the window before a storm. I always liked the wildness of the winds. My older brother's neighbors are from California. Our storms instill a lot of fear in them. I find this amazing in that California has so much natural phenomenon, our little thunderstorms don't seem to compare. It is all in what you are used to I suppose.

I have been very lucky to never experience a tornado. I've had some be close. I've slept through winds that toppled large pecan trees. The funniest story which is not that funny if you experience it was a tornado that swept through in a neighboring area. No one was hurt. There was a lot of property damage. One man was swept out of his house but unharmed. He was drunk as a skunk and barely processed what happened.

On the back of my house under the eaves, a bird called a flycatcher has build a nest. I thought they had abandoned the nest last year. I have two cats that live on my back porch. They would watch the swift bird that was nervy enough to catch flies that were attracted to their left over cat food. They suddenly disappeared before a storm last year. I worried those two cats got their young.

This year, the nest was repaired. About a week ago, the nest was bustling with four smart aleck babies. They were on the edges, spreading their wings, obviously talking bird trash. That evening we had a big storm. The birds and their babies were gone the next morning. I guess mom and pop make haste when a storm brews and the cats move to a more sheltered spot. . And moves their family.

What I enjoyed the most is that the birds can be seen sitting on a fence post and flying back to a pear tree. I wonder where they all go after the storm each year. I have seen fly catchers in my side yard. With a horse farm near by, you know we got the flies. 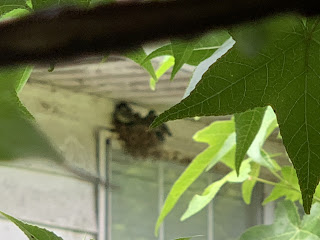 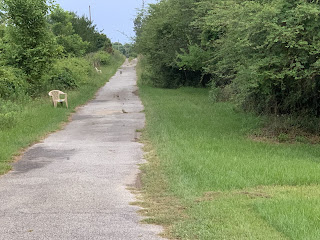 I am so like the white rabbit in Alice in Wonderland. The least thing that can distract me makes me late. The other day, I was ready to go to the doctor about an hour and a half early. I jokingly told my family I would probably be late. I began to play a video game on my phone, listen to the television and talk with one of my sisters. I look up and realize, if I did not get in the car right then, I would not be on time.

I'm boogieing on down my driveway and I find it blocked by these guys. Well this male and female snake. Snakes are not hermaphrodites. I was hoping their procreating did not last thirty minutes. They were not distracted by me walking around them and telling them they needed to find a safer place. I mean, I would never drive over them.  It would have been very troubling to me to have driven down there and found where a car had killed them. I guess the light rain on a shady area of my driveway made amor so irresistible on a hot day. 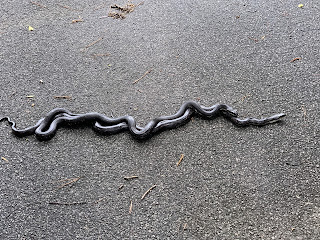 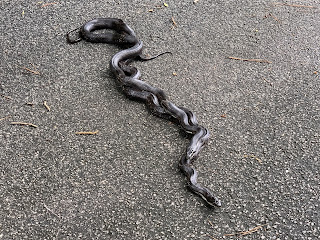 Fortunately after I got a few good photos: they separated and went in opposite directions. Nature truly understands how to hook up. Later I read they can spend up to four hours on the deed. Woo doggie, I guess I would have to cancel my doctor's appointment. Cough a few times in the phone and say I might have Covid would sound a lot better than two snakes are mating in my driveway.

I had gotten a yardstick from my car. If they took much longer, I was going to slide it under both of them and move them to the side.

There is a legend that snakes represent change. Earlier this year I saw a rat snake like a thick rope on the cattle fencing I have supporting some grape vines.

The question I have is whether this change will be in addition to the normal change we all have in our lives. I mean I meant to hike the Appalachian trail in my retirement. I am pea green with envy over a friend of mine. She goes on Golden Oldies Cruises and takes a trip to the Holy Land every other year. And she openly discusses she is going to hike the Appalachian trail. I am so so jealous.

What about my slow boat to China?

Well currently my boat is tethered in Central GA to seven dogs, seven cats and four people. It is going to be an especially slow boat. Being an American, I guess China is out as a travel destination. Add to that I want to go to Mongolia and hang around. Then I want to ride the Siberian express. And Russia is definitely not the best travel destination for an American. (I worry about Brittany Griner who has been imprisoned. I do say a prayer for her.)

My sister is taking a new medicine which upset her stomach. She is too scared to transfer to a bench into the shower. So I have a technique of washing her in her wheelchair outside. I have eight gallon milk jugs and two buckets filled with warm water to accomplish this. We were outside at 3:30 in the morning, The full moon gave a lot of light, and there was something in my front pasture wailing. From the sound of it, I suspect it was an owl and coyote mix..

One day I may discover it was an unusual cricket or frog.  I unlock my car door so my faithful dog can sit inside to wait on the bathing adventure to end. I suspect it could be something that my dog would be making a huge mistake tangling with. We would have gone straight into the house but the four cats hanging out with me made me feel whatever it is would stay where it was.

In the near future, I plan to have one of my bathrooms done so I can roll a wheelchair in the shower. But meanwhile, while it is warm, well hot as hades here, we will continue the outside shower. This is one of the benefits of living off the beaten path.

So my explorations will be bathroom renovation. Yes, I am going to do it myself with a lot of help from Youtube videos. I do plan to have plumbing service come in and install the new toilet. The big thing I am going to do is remove the present cabinet and place a small sink in there for hand washing. This will give room  focus to roll a wheelchair into the shower and to aid in the transfer from the wheelchair to a toilet.

I'll continue my daily walks around my property. It's not the Appalachian trail. But there is a lot of nature to be appreciated. I can practice being on time. We were about thirty minutes early for my mom's doctor appointment this past week. Hooray for me!!!!!