Autumn slightly edges out Spring as my favorite time of the year. Much of it is due to the milder temperatures. The lawn part of my property is a bit out of control. I've mowed a little of the worst about half way. Tonight, I plan to work a bit more. I could wait a few months and really have an easier time maybe. Next year I plan to purchase another riding mower. The push mower is moving the snake line further back.

Where I live, how much I mow is flexible. Some will not be mown before winter sets in. I love the Autumn wild flower parade. There is a new coyote in residence which makes me want to mow a bit. The dogs will only go out close to the house in the mornings and evenings with a longer walk midday. I'll be able to admire my flowers better. Besides the coyote is quite sneaky. We have to be mindful of him or her all the time.

My favorite snake which I missed a photo opportunity was a nosy black coachwhip? that arched his head up to look at me. Coachwhips will chase you. Upon catching you, they wrap around your leg and beat you badly. My dad told me that story with the additional information that the snake is just nosy. The snake only wants to get a good look at you hence the chase. I've heard stories of being chased.

I'm a snake respecter. I definitely do not have a hankering to hold one; although, I have held many. My favorite time was rescuing my body builder neighbor in a duplex. He couldn't walk out his door because of a snake which was probably a black rat snake. I gingerly picked up the snake and walked it to a wooded area about 100 yards (meters) from our homes.

One time my dogs were all barking at a harmless King snake. The yellow lab, Mathilda, I owned at the time kept retrieving the dang snake and dropping it at my feet. Each time I squealed like the body builder. I don't think Mathilda was being all hoity toity with me. Just being a retriever is the vibe I was getting. I swept the rather large snake onto a large shovel and gently tossed it over the fence to the overgrown pasture. It was rather pretty.

About two months ago, I saw how a copperhead got it's name. There was one in the middle of my driveway. I turned immediately. It was coiled, hissing, glittering gold in the sunlight. My dogs did not follow my instruction to turn around and come home quickly. They had to approach the snake. They hadn't ever made an acquaintance with that snake. Fortunately, nothing happened. We do have rattlesnakes which I have seen. I've had two dogs to die of snake bites.

One time I had the biggest rattlesnake in my garage. I literally swept it out with a push broom. I had called the sheriff department and the young woman officer was going to shoot it with a shotgun but it was too close to the house. When we walked around the car, that dang snake was gone like disappeared. I had a large Confederate Rose plant that she felt the snake disappeared into.

I sort of wondered it it was a spirit in that it disappeared so quickly. I did not want to say that to the officer in that she would have thought I was crazy for sure. Plus, the snake was very solid when I swept it out of the garage.

According to Native American mythology, the snake is a harbinger of change. Now, I don't know which group of folks share that exact belief so I made a quick google of snake symbolism. The Greeks felt snakes were sacred and used in healing rituals. This is why two snakes encircling a staff is used as a medical symbol called a Caduceus.

Above is a gravestone found at Glasgow Cathedral in Scotland. Below is a caduceus found on the Russell Dixon Building in Washington DC USA. 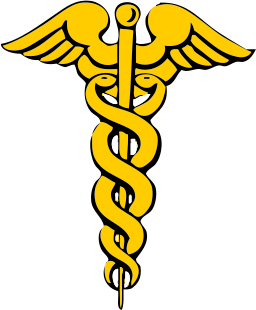 For those of us with  Judeo-Christian heritage, we all know the allegory of a serpent being the tempter of Adam and Eve in the story of original sin.

Moses staff was turned into a serpent before the pharoah and was used to part the Red Sea. The staff was adorned with a snake which protected the Israelites from snake bites as they wandered the Sinai for 40 years. Moses was not allowed into the promise land because out of anger, he hit a rock with the staff to provide water and did not have faith to simply ask the rock.

My favorite insect is a snake doctor. That is probably my cosmic connections to the snake. Truthfully, I admire all creatures. My dad would have us to capture spiders and take them outside. Dad said everything has got a job to do.