At least I have had my shots.

This has been a rough year with bad colds at our house. Before Christmas, we all came down with a cold. It started with sister B who rarely leaves the house. I can count on my hand four locations she had been in the prior three weeks.

Usually I have a mild cold and keep the home fires burning. Well I was sick longer and the house looks definitely lived in. I start to get better and busy, my sister A has a stomach problem. You don't want the details. I have cleaned up a lot, changed adult diapers, taught school for over thirty years in which I cleaned up vomit many times and I still don't like the details.

( I know the custodian is supposed to clean up accidents, I just never liked it sitting out with the germs floating in the air. Up, out and sanitized is my theory. Plus, I never liked children to think they were too good to clean. I did not make them clean it up but it was my hope that I taught by example.

There is one exception.

I had one male 6th grader who was being outrageous at lunch everyday by overeating and then puking to the entertainment of his classmates. On the third day, I lined the children up and walked him back to clean it up. The show ended. I was curious if mom was going to complain. You're not to make kids clean as punishment. I heard nothing. Evidently, he knew better than tell his mom about his comedic ways. Most parents hold their child accountable.)

Back to our aches and pains, we all got the stomach bug except for the sister B who started the first round of colds. The only good part is that I have not eaten well and my blood sugars are great with no meds. I didn't eat day before yesterday. I was afraid my stomach would sour and I did not eat. I watched my blood sugar. It is better than usual. I didn't take the meds because I didn't need them.

So I have got pollen season medicine stocked in the house. By March 1st, I am going to be outdoors as much as I can. I want a garden this year. We don't eat much. But if the garden produces a lot, I'm sure to find someone who would appreciate the food. Fresh tomatoes out of the garden taste better than anything.

What is surreal is her image becomes almost like that of a robot. No humanity can be seen. I think there is a future in sex doll-robots. I would hate for a grandson of mine to have a relationship with a robot. But it is possible. We have a small rundown strip club by the interstate. The parking lot looks empty and the place abandoned by day. One night I drove by around midnight, the place was packed.

Makes you want to never complain about your son in law again. He too could be a robot. Imagine a robot programmed to irritate only you. You wouldn't have to worry about your daughter raising her children wrong. There probably would not be any children. Hopefully hubbybot would clean the house when he's not recharging in the closet.

Obviously I need to get up and get busy with these deep thoughts I am having during my convalescence. I'm sure I could think deeper if twitter let me turn in catfish. A catfish messaged me and said, "Hi, your profile makes me attractive." My profile is a dead fish; it makes anyone attractive you dummy", I could retort. But I block politely.

Ms. Blue looks like a comic book character at times. There is an endless video of her shaking her booty on Reddit, some abrupt twitching but not much of the athleticism of dance.

The huge tragedy of nursing homes, group homes or any place that people are housed because they can't care for themselves is that lack of human interaction. It's important for those who can to visit them.

Anyway, talk amongst yourselves and if you have anything really outrageous but rated PG or G to say, please put it in the comments.


My first pictures are of the yard flowers, then a few from twitter. Which is prettier? 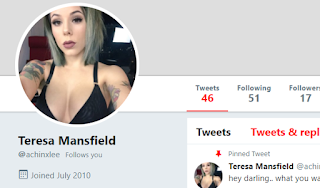 Ah to have cold days, it mean less bugs next summer, peaches will be blooming and hopefully fruitful as a result. The down side, baby it's cold outside.

The days are getting longer. We have survived the blizzard of 2018. I've discovered the bird that is so panicked during bad weather is a Killdeer which lives surprisingly close to my house. I suspect several locations could be it's shelter. One fortunately will not be disturbed when I commence work outdoors. It is a huge unwieldy rosemary bush.

I bought my brother a rosemary bush when they were reduced to a dollar after Christmas about ten years ago. He put his on a wagon and brought it in at night. Mine is maybe a 9 feet in circumference nightmare. Nightmare in that I would not reach deep into it. It could have a rattle snake in it's midst. I suspect the Killdeer can sniff him or her out. My brother's carefully potted plant has long met it's maker. You know the cold will kill them. Thank goodness no one has told mine.

During the snow, the Killdeer was quite vocal with me. I take enough orders from the resident animals. I also have a pet spider. It is a wolf spider. I was glad to see it's kin return. Last year, one of the physical therapist who visited my sister stepped on that spider for me. I hate it when someone kills one of my pets.


We also have resident bobcats. Some barn cats from next door work my yard. A few cats from across the way have worked the front field. Then, we saw this cat who was still a kitten but was unusually over reactive to the car. It was a bobcat. I had seen a scraggly one years ago. I have seen a large one bounding across the road to leap into a dense overgrowth. Last Sunday, we saw a healthy bobcat about 100 feet from the house.


I used to see bunnies along the driveway. I thought it was unusual until it dawned on me those were half grown babies waiting on the mother rabbit to come home. There are three fences in close proximity for about 300 feet and they make a great nursery for rabbits and fawns. Bobcats mostly feed on rabbits. So I have not only a great rabbit nursery, I have a great habitat for Bobcats.

Bobcats are better than coyotes. Coyotes and rattlesnakes are not that great close to the house. I keep my grass mowed. I was putting a garden in my front yard; but, thinking of coyotes and snakes. Poor old Killdeer will have to move. Where a Killdeer nests is, rattlesnake will visit. The mower is being cranked. It will be 70 degrees today.

Like a bad habit, I have returned to the blogosphere.

I'm going to the Southeastern Writers Workshop from June 8-12, 2018. It will be at Epworth by the Sea on Saint Simons Island Georgia. If interested, check out the website  www.southeasternwriters.org.  It is a small conference. My favorite parts are listening to all the writers tell their stories during meals and the open mic nights.  I'm bringing my camera, lights and screen to take candid or posed portraits of participants to use in their promotional materials.