I watched the vice presidential debate tonight. But there is a bigger piece of news I need to share with everyone. It's even bigger than Brad Pitt and Angelina Jolie's custody battle. But I don't think I am going to hear from People magazine. 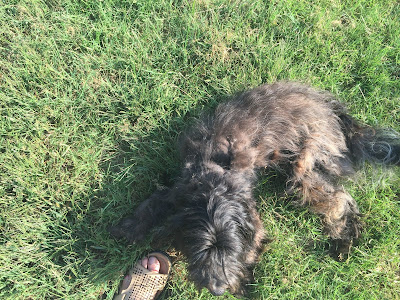 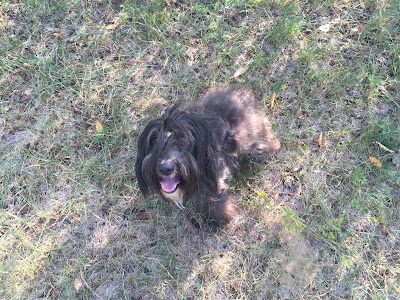 At the end of the road I live off of, she has been standing watching traffic on HWY 96 which is a large divided highway. She appeared to be looking for someone.  Long story short, she ran when I got out of the car to feed her. I told myself, I would have a harder heart and only feed her. Perhaps dilly dally her presence to local rescues. They were all overloaded this summer. So I was going to do what many do which is to put food out there until someone gets her.

Well, we came home yesterday afternoon, and she was in front of my house. My driveway is 1/3 of a mile long. I live about a mile and a half down from where she was hanging out. Initially, she ran from me. I shook a bag of dry food. She was interested. I put some food on the front walk.

When I came back to the car, she was my new best friend. Today, I have been trimming the excessive matting on her fur. I've got her in a cage in the house for tonight. Just a lovely personality in about a thirty pound package. As I cut her hair, I noticed, she knew how to hold her head for trimming. I plan to take her to the vet for shots on Thursday. With luck, she will have a chip. People do dump dogs here. But sometimes, dogs do get lost. Her hair was a matted mess. I cut through mats filled with briers.

I learned a lot the last time I rescued a dog. I can't keep the dog. I am at my personal limit. The one thing in Darlene's fate is she is not a pit bull but a cute terrier which people are not afraid. I'm also dealing with this with more confidence. When I start advertising her, it won't be please take this dog. It will be, this dog is the bomb and she costs money folks. Since she has long hair, whoever owns her must be willing to spend a little money at the groomers.

For a shaggy vagabond, she got pretty indignant when I gave everyone a potato chip but not her.

My family is not too thrilled with Darlene. My dog Duke is aggravated. He's also aggravated that I bought him a new collar. Sort of like how most of us feel about this election. I'll be glad it will be over. I've noticed only a few stalwarts constantly post political memes. It is sort of like most have decided it is too hot of a potato to handle.Frankly, I enjoy the wilder memes. Where are all the Jill Stein and Gary Johnson memes?

I'll posts photos of Darlene when I get all the matting off. We got maybe over half off today. She just got too stressed, so it was time to quit. But she is clearly half the dog she was. One thing I can say about the debate tonight. The dog is a better topic. She is cleaning up to be a handsome girl. I don't know about this election. Neither one of them had a plan to mend fences. Maybe Brad Pitt and Angelina Jolie can give them some tips in People magazine.