And the wolf is at your door. That was so true 200 years ago for many people. Houses were built with no porches and where they could see what was around them as they left their homes. I've read where people probably survived due to their symbiotic relationship with dogs. Dogs gave them warnings of danger. My favorite dog story is the one of my brother's stepson. His grandmother took stray dogs in. His grandparents owned a junkyard. People would creep in to steal what they needed. It was not unusual in the morning for one of his grandparents to rescue someone who had spent the night on top of a car. The dogs would quietly circle the miscreant and then announce their presence.

My dad had a man that worked under him at RAFB. Other supervisors did not like this man but my dad kept him on his team. He always felt there was something unrecognized about the man. Later, the man saved a group of children after church from a rabid dog. Most people would have protected themselves and their own children or the ones easy to save. This man picked up a stout stick and walked over to the sick animal and dealt with the situation. At that point in time, contracting rabies was a death sentence for anyone. Although there is a treatment if you are exposed to rabies, rabies is still a problem where I live. And if you don't start treatment in the beginning, it is still a death sentence. I keep every animal I have inoculated.

We have record numbers of children at the United States border. It is a burden. I think we should take them in and educate them. They will be the workforce of tomorrow. America is a graying country. Plus who doesn't feel humility to know one of them is ten years old and has walked from Bolivia in South America. It is 4237 miles as the crow flies on one Google search. I don't think too many crows have picked him up and carried him. I get it that our borders should not be porous. I'm just thinking about the ten year old. I wonder if he has a home to go to.

One problem for migrants is there are human traffickers who just see a dollar sign when they look at that vulnerable population. For some that wolf is breathing in their face. My mom and I were talking about several teenagers would be good to have around. They could stay with us, go to school and help us out around the house some. I know the deal would be much more complicated and could become an out of control hell.  But the ten year old, I know someone would love to adopt him.

I made my living teaching teenagers and I liked them and loved them. The highlight of my career was teaching at an evening high school. They did not admit many younger than 16. The school's policy was it could expel a young person from all public schools in Georgia for one year. And it happened to a few. What I found working with these young people were they had had many hard knocks. The spoiled ones never lasted but a few days. Georgia does not issue driver's licenses to anyone under 18 not enrolled in school. Few lasted the eight days needed to get the paper work for the driver's registration.

You never asked them a question if you weren't prepared for the brutal truth. They did their work like a requirement. When they were finished, they were finished. The secret for total cooperation was their knowing they could trust you. These kids knew about trust. They understood the wolf.

In dealing with them, a lot of instincts kicked in. One was I never let them know when I bent the rules. If they had a disagreement with you, for some it entailed a character assassination of you. That bent rule in their favor could be used to attack you. They would ask me specific questions like how many absences and tardies they had. This is something I did not fudge on. Three tardies counted as an absence. X amount of absences meant they did not get credit for the class.

Where I fudged was grades. I had some who needed help to get to the passing grade. There were a few who a higher average helped them get the GA lottery scholarship to college. One semester, It began to snow the night before exams. So we could give kids their final a day early. In a chemistry class, I gave them the first hour to study. Many wanted the test then and to leave. I decided to add a point to their average for every five minutes they studied. One young lady studied for 45 minutes. She received a very high average as a result.

My dad passed away that night. My grandmother was in the hospital and we were expecting her to pass. As that young lady studied, I looked at the clock. I remember around 8:25; it was like a presence was in the classroom and it said, "So this is where you work." The presence felt very joyful. I had heard of things happening when people passed. I was surprised in that I did not know my grandmother well. We lived an 8 hour drive from her my entire life. After I had graded papers and turned grades in for the semester, I heard my phone beep as I packed up my classroom. I got the terrible news. I had about two minutes worth of work left but it took me a clumsy 15 to 20 minutes to get it knocked out of the way. My dad had passed after 8 PM that night.

Like everyone, I have fought my battles. But that night, I lost my back-up. Oh I know I have had people help me over the years. I may have known it or never known. One of the gifts my dad gave me was to not fear the wolf. I was never a 17 year old walking into a different country that spoke another language. I was girl who went to a local hamburger place after a football game whose dad just happened to there. A man who for no reason had purchased many burgers, fries and sodas for me and my friends. 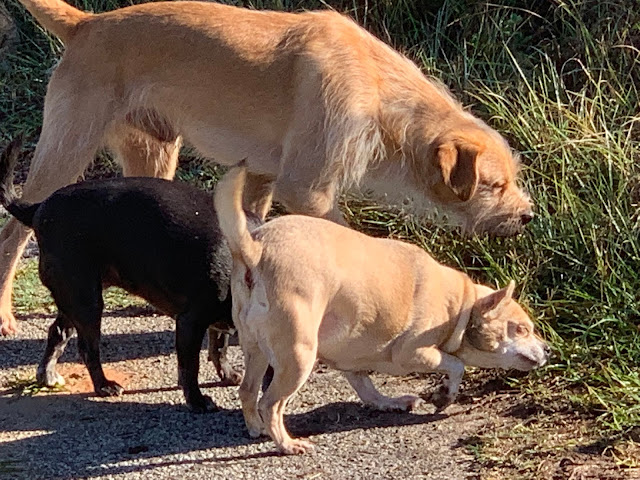