Heck with losing my mind, where is my filter. 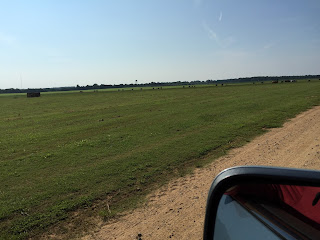 Fried chicken livers are on sale at Harvey's and my mother knows it. I will be slipping in around 11 am to buy up 2 lbs. I can tell you what the faces of the workers will be. It will be a definite "Oh Shoot".  I try to keep the language clean on this blog. They hate fried chicken liver week. Whenever I get them, there are people lined up to buy them behind me.

I've learned something big about my mother. As you get older, that harden filter disappears. There is an outdoor area in front of a popular chain breakfast restaurant. Mostly seniors are in the establishment. Outside the store there are a few chairs with a patio table where some older men and sometimes a woman smoked, drank coffee, etc. Well there is a sign now, no cigarettes, gambling or rides. It was empty.

The men who congregated were very normal looking men who probably just liked to talk a lot. It's a military town. They were probably all Vietnam veterans. I would be interested in hearing what they think of Trump. Either they will think he is the second coming or some other candidate suits their fancy or more likely they will agree about the corrupt nature of politics. None of them will favor Clinton or Sanders. Some of them might privately vote for Clinton or Sanders. I guess something unsavory happened there and they have had to make rules. It is a business not a gathering spot.

As we left the parking lot, we saw some homeless people. One was a female who probably was a hooker. She looked dirty and was with an equally dirty man. They were sitting on the curb smoking with their grocery cart of possessions. Two other men who looked like stray cats were walking back and forth to the main road. They may have been working gents.

One time when we came out of the restaurant, there was one guy walking up and down the side walk. You can see hunger. After we loaded up in the car, I gave him $7 and a coupon and told him to get something to eat. He went straight in. Whether he ate or not, I don't know. We left.

Why would I think these folks might be looking for "dates". I watch too much crime TV plus I went to a session by a young woman who worked as a prostitute decoy for a police department. She dressed as a pretty woman; but she showed slides of what they actually look like.

I picked up skills of noticing things out of place as a teacher. I know my radar doesn't work as well as it used to; but, I do notice things out of the ordinary as I drive down a road. This stretch of road I traveled every morning and mid-afternoon twice.

There are two low budget hotels in the area. Plus open wooded areas. I stopped at a store next to one of the areas. I don't always lock my car and sometimes I leave the windows down a bit and park in the shade. I have my bully dog with me most days. I left the engine idling with the AC on and locked the doors with a spare key.

When I came out, two women with bedrolls were geegawing at my bully. I stood at a distance for a moment and looked. They looked at me and went on their way. They may have been harmless. They may have took my bully. People use them to fight. The bully is more of a biscuit eater than a fighter. If someone broke in my house, it would be my over sized chihuahua that would take a bite out of crime.

The car may have been an object desire.

The dog was the only thing of value inside the car.

They may have just been admiring the friendly dog. Your heart hardens through life. I still feel some humility that I never have had to sleep in the woods out of necessity.

Back to the homeless people, my sister pointed them out. My mother is saying where. So she can get a gander, I deliberately turn left toward some gated apartments and turn back in their roundabout. My mother sees them going and coming. Stopped at the stop sign waiting on traffic she says, "I don't think we should be helping those people."

I tell my mom, we were just looking. I don't think they even noticed us. After I turn left going on the main highway, my mom has teared up.  She suggests we call the police and get that woman some help. I tell her the obvious, the woman was looking at her smart phone and laughing. She is probably OK in her world. Besides what help when I thought to myself.

So we will never take time to notice that again. It took awhile for mom to think of other things. My mother's mind is good. Her hearing is poor. But that filter we all build is as thin as a teenager's. I admire my mother's ability to love and care for people. It is one of things my callused heart questions about myself.