What kind of pine tree are you?

Well the week has gone quickly and my regular Friday post has not been written. I kept musing poetically this evening as I drove from my home in central Georgia to St. Simons Island on the Atlantic coast. There is a piece of each scenery which is so familiar and rustic. Which leads me to think, which pine tree would I be.

Rows and rows of tree farms,the silvery backsides of some errant deciduous tree would be in the fold of pines. Sooner of later, they will burn the forest to get rid of competing plants in addition to excessive fuel for fire. There is a point where there is so much fuel that the a wildfire would burn so hot that it would kill the trees. 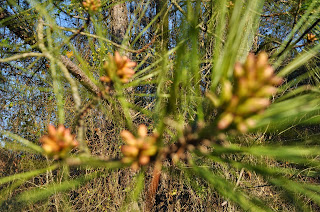 Farming is doing well. It is hot as hades outside but the plants love it.

This past weekend has been a big turning point for me. I won't say I grew up poor. I grew up with limited resources and uncertainty. It made me an independent person. I've never been able to relax and put my fate in someone else's hands.

I've never been stingy. I tip. I pay service people what they ask. But I am thrifty. I find a plastic bag that can serve as a trash can liner, I use that bag. I dilute my shampoo to make it last longer. I cook an extra piece of meat for dinner to divvy up between my dogs. Fortunately the sixty pound ones see their small piece is the same size as the others and don't complain.

Where am I going with all of this?

What kind of pine tree am I.

Am I the stray one in a field that has survived a cutting the past year. I'm most definitely not one of the young ones in a row. I would have wanted to be one of those at one time. I am a conformist. I like to be in the norm. I guess I am one of the older trees in a row. I would have liked to have been the sole pine that was about ten feet taller than the rest. It's limbs wresting in the wind and looked remarkably like a cartoon character moving in place. But I've never liked being the center of attention, so that one is not me.

I forgot my nightgown, so I am sleeping in the closest thing I have to being a t-shirt. I do have a big housecoat. It is that official point of relaxation that I am missing with not having my nightgown. At home, I wear some loose fitting pants and a shirt in case I have to get up in the middle of the night for some reason.

I am the caregiver of three people I love. None of them are a big burden. What I offer most is my time and haphazard cooking ability. I made a pot of spaghetti, salad and cooked some small loaves of bread from the grocery store before I left. I know a lot of their meals will be the weight watcher frozen meals, soup, cereal and easy to make food. My mother has the spirit to cook a lot of food but not the energy. And she is on a salt free diet which limits her desire to eat.

A man who is ten years younger than me died of lung cancer last week. I knew him from walking up and down an area of my hometown. One time, I came close to giving him money because something did not add up to his having a home. But a car drove up with a woman around my age. He looked peeved from having to wait and headed for the car.

What I did notice was his hair was cut, his clothes were decent and clean but he was out of place. He clearly did not have a purpose. No, I don't think he died because he had no purpose. I think he missed so much of the joy of life that purpose gives us. For him to be wandering up and down the road until everyone in my family knew who I was talking about, he clearly did not have a place. I knew of one homeless man that the community rallied behind that actually had a home for awhile. It was the loneliness that led him back to the streets.

He had no obituary, no funeral. You can't save the world. But I wish, the world could have saved him.

So tonight, I will sleep well from working hard this week. But my prayers are to thank God for my purpose and place tonight. It might not be what I would have chosen; but, it clearly is a gift. I will also pray for those who struggle in this world.

I know I am a pine tree that was planted with purpose and has a place.