I don't boycott stores or products. Like many people, I lost my taste for tuna when I heard that dolphins were being caught in tuna nets and drowned. Apparently, I was not alone in that years? later; tuna cans would say they were caught by dolphin safe nets.

I lost my interest in Woody Allen films when it was revealed he was dating his step daughter.

But not buying products because of politics has no effect on me. Yes, I would like to see the person who paid for the hotel rooms for those who stormed the capital be prosecuted. But contributions to politicians do not concern me. It does concern me when someone who lives on limited funds make large donations to anyone.

I know of an older couple whose home was being sold to settle debts. They had borrowed money to give to missionaries. A piece of me thought those missionaries should be sending them some money to help them. That moves to my thoughts about maybe there should be legislation to prevent this.

The political angle does not bother me in that I have a minority opinion where I live. I vote for either political party but I have an inclination to vote Democrat. My opinion is both parties are corrupt. I don't believe in the Democrap and Repugblican philosophies. They are human beings and they have to ride the bandwagon to be elected to be a part of government.

I have had people to not be my friend over politics and that bothers me. I liked them regardless of their politics. But they have done me a favor. They were not my friend. Sometimes I recognize a kindred spirit who I don't agree with in politics. I have wondered if I would be a conservative where liberalism prevailed. Anytime you have a preponderance of people following a political idea; they are ripe for corruption to set it's lazy, greedy ways in.

And what got me on this topic you might ask. Well if you read this far, I should really share. It was for an over priced serving of  soft serve ice cream by Chick Fil A. I took one back into the store. I thought there had to be a mistake. It turns out, they only sell small sizes and they weight their product. Alas, here is a picture. I originally wanted to put my picture on Facebook. Then I thought, I don't boycott or do crap like that.

Plus there are many who would be content to pay $1.25 for that tiny bit of soft serve. Not everyone is a hog like my family is. We like to buy large and enjoy ourselves. My little dog, Bo, loves the bottom of my ice cream. When we go grocery shopping, we go to Chick Fil A. Mom's dog, Jobelle, loves chicken nuggets. My 90 year old mom likes to get her dog some nuggets.

So, I am packing dishes, spoons and a serving spoon. Next grocery trip, I am buying some good Mayfield Ice Cream. Once everyone and the load of grits is packed into the car. I am getting our ice cream out and serving everyone. 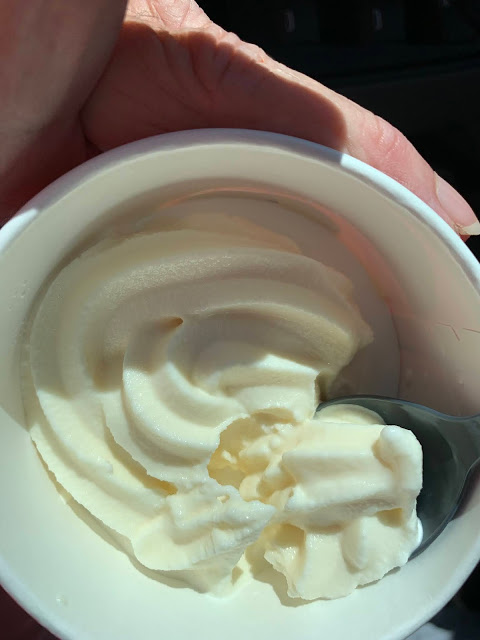 We might have to sit in the parking lot for a bit. The dogs have to eat their cream in a controlled environment. Jobelle and Bo can get quite testy about their treats. Each thinks the other got a better dish and they don't want the other one looking at their ice cream. Ice Cream is much better on a sunny day in the car. We've got two ancient containers at home that I need to throw out.

We will still get Bo and Jobelle a box of nuggets. My brother and sister enjoy their Chick Fil A lunch before we go in the store. My mom and I have long been burned out on their food.

I have an ice cream maker. I am making ice cream for mother's day. It's going to be a party. I'm buying strawberries too.