The things you do for a thrill at 60.

Chill folks, I don't plan to blog politics. This is slightly political in that it is about something I did. As a retired science teacher, most Democrats, many Republicans and loads of Tea Partiers, I am concerned about environmental issues.  There are elections and then there is another part of being part of a Democracy which is advocating for issues that benefit us all. Other than that, I am sick and tired of politics. I've thought of not watching the news.

This was a common sign at the Women's March on Washington. Organizers created bus rides from various points in Georgia. One lonely bus left from Macon, Georgia and I was on it. The bus originally left at 10:30 PM on a Friday and were to return at 5:30 am on Sunday. In actuality it left at 8:30 PM and arrived in Washington around 9 am Saturday. The return was around 9 am Sunday.

Now why would I want to go? Didn't I have plenty to do at home?

Shouldn't people just accept the election is over? Well the election is over. I am not contesting who is President. What I am interested in giving my input to my elected officials as to what I think is important. Like I don't want rivers in the United States to have water that resembles green cottage cheese like it does in some Chinese rivers. I don't water to be contaminated like it is in the former Soviet Bloc countries. Good politicians make decisions based on their constituencies input.

I'm a thrill seeker. I have never been a part of a movement. The March was not a Trump protest. It was a declaration of women's rights.

Everyone enjoyed one another. You spoke to all sorts of people. Yet everyone was familiar. Around noon, I sat on some steps and watched many families eating their lunch. Mom, dad, kids passing sandwiches around. A teenager scrunching her face after biting into her sandwich; dad switches sandwiches with her and they continue to eat.

The signs were hilarious and sometimes serious. The funniest to me was a large pink poster with the words "I can see Russia". I also enjoyed the one that said "Don't tampon my country". There were a great many patriotic signs with historical quotes like the coiled snake saying "Don't tramp on me". I go for the humor.

I ate a falafel. It was seasoned chicken, chick peas and rice in a wrap. They put a sour cream sauce on it and some paste. Having to watch indigestion with the double whammy of being on a bus; I chose my food carefully. I had brought several peanut butter and raisin sandwiches.

Law enforcement and emergency personnel were very friendly to the crowd. One took the time to make sure I had the most direct route back to RFK stadium where the buses were parked. I still did not go the right way. A local man walked me to a subway. I took the green line to find the blue line closed down. The entire system was overwhelmed with riders.

Washingtonians welcomed us with open arms. People allowed us to use their bathrooms, recharge our phones, gave away water and coffee. They were so friendly.

Sitting behind me on the bus was a former student with his girlfriend on the bus. They clearly had a great time. They were a darling couple.

The real motivation was knowing it is a man's world. How do I know this? I have an individual that goes everywhere with me and it is my developmentally delayed brother. If information is important, people make sure they explain it carefully to him. In returning to the United States, my mom and I gave knowing glances as the San Diego waitress refilled his soda and ignored us. We were giving the tip. We tipped her well.

It is catching myself in telling the young nurse in my sister's hospital room that nursing was a good profession for a woman. I was thinking of how I was told in my twenties that teaching wasn't everything but it paid well for a working woman. I have no regrets with my choice of profession. I enjoyed it for the most part and the profession broadened me in ways many other professions would not have. Add to that my view of world was pretty naive.

Sexism like racism is roughest in that the most damaging aspects are subtle and hard to put your finger on. I've seen the glass ceiling and I have been put in my place. I was born a humble person.
It's knowing how someone who has fought the good fight in a male dominated profession and has paid a huge price in personal happiness and health to stay there. It's keeping the secret when you have been propositioned by a co-worker. You try not to make waves and yet you sweat possible repercussions to your rejection.

When I see a young person, I want them to do their personal best and not make decisions based on what works best to maintain the status quo for their sex, race or social class. This adds public education to the list of items I advocate for.

I went because of my concern over environmental degradation and healthcare.

With my sister in a stroke rehab clinic, I slipped out of the house for an adventure that was worthwhile. The amount of walking I did was punishing. I stood most of the day or walked. I did sleep sitting up in the bus. I listened to people talking all night the first night. There wasn't a peep the second night. We were in a collective deep sleep.

As a teacher, I agreed with everyone's dad at the dinner table. When a child told me what mom or dad said, I admired how special their parent's were. But this past election, I saw how I straddled the fence and did not say clearly how I felt. I recognized the same pattern in Facebook rants of other people.

I took the following from a Facebook page. This is why I went. I have a right to speak my mind. 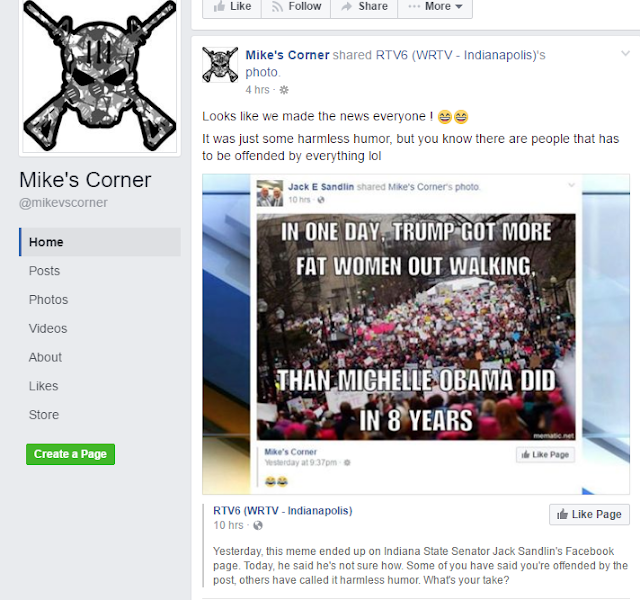 But this is the original reason. I was limited by the choices in Wikimedia Commons. I try not to use photos that artists are making a living by selling the rights to.

This is algal blooms in Newport, Rhode Island. The picture was taken in 1970. Although water is cleaner in the United States due to the clean water act of 1970, there is loads of pollution that has been documented. 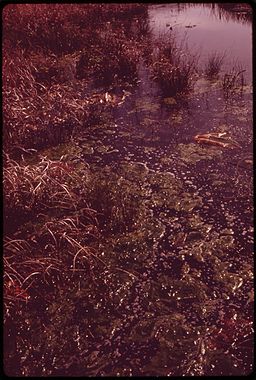 This river is in Taiwan. I did not find any pictures of China. But we have all seen photos of Chinese wearing masks during periods of heavy air pollution.

Photo from Poland. Due to lack of pollution controls in Soviet Bloc Countries; almost all water sources are contaminated.

href="https://commons.wikimedia.org/wiki/File%3AAutumn_Tyres.jpg" title="By Tom Thiel (Flickr: Autumn Tyres) [CC BY 2.0 (http://creativecommons.org/licenses/by/2.0)], via Wikimedia Commons">  This photo is in Russia. There are comparable scenes in the United States. 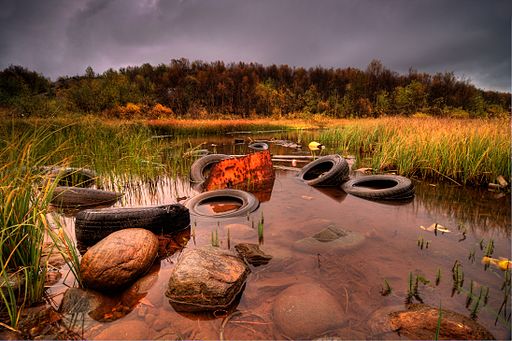