Snoozing til 7 am, what a life!

Tomorrow night, I'm looking my brother in the eye and telling him we are sleeping in. I don't want to be woken up until it is light outside which will be around 7 am. Daylight savings time has come with a thud at our house.

We're all complaining and on edge from lack of sleep, lol, fofl, I wish I could laugh some of this belly fat off.. Except for me and my brother, everyone is snoozing by 8 PM. I liven up a bit. Nobody is going to ask me to stop and do anything. Last night I fell asleep in my recliner.

My brother wakes at 5 am to eat breakfast and that usually gets me rolling. I told everyone when they woke up, after I drop him off, after I get my sister fed, dressed and back to bed,  after I feed the dogs. I am taking a big snooze and then going to exercise.

Well I dawdled on ancestry dot com. I have no intention of doing all that research. While I'm at it,,I'll just start one of those tree things. What has me hooked is my mysterious grandfather Benjamin Franklin Bennett. I've heard he was Irish. I read in the 1940 census he was born in Germany. In the 1820 Census, he has no military service. He was Teddy Roosevelt's personal guard during the Spanish American War and an ambulance driver in World War I.

At first I thought, why did he lie so much. Then I thought of the census. It may not be totally accurate. They may have completed it quickly in 1920 and failed to check he was a veteran. In 1940, I don't know. I had heard from others that our great-grandparents were from Germany which is interesting in that they weren't.

Well with Ancestry DNA, I know who he is, who his brother and sisters are, parents, and can follow several family trees back so far in England, they ain't no way I can share much DNA with them. Plus, my low level of German/French ancestry has to be from my mom who is about half.  Even my mom's grandmother who was supposed to have been Irish wasn't.

Are you bored by now? As a science teacher, you know I love a pattern. The bots visiting my blog has ruined a lot of fun for me. I used to love to look at the statistics. Follow people back who visited me. Now, I get that Whoa from McAfee saying I don't want to go there or worse a frozen screen. But back to the DNA jazz. It is more fun than I thought it would be.

We got the information sometime last year. We were really surprised. There were stories and rumors of Indian ancestry in my mom's family. This is truly baffling in that I thought people tried to hide that around 1900 and I got family talking openly about it. I had told my childhood friend that I might not have Indian. She says, "Oh Ann, with your big nose, you know you're part Indian". I said, "My nose was a Roman Nose". I told her!

Well my sister did the test first. She had no Indian. It was mostly the British Isles and 18 percent German/French. At the time I thought that was my grandfather.

I know, shut up about your Grandfather.

My mom and I both did the test. I recommend getting grandparents and further back to do the test if they are still living. My mom's profile was interesting in that some of the trace amounts that disappeared in me did show up in her DNA profile. But no Indian, no Africans. My mother had Mennonite ancestors. Mennonites formed from European Jews and Christians. My mother was one percent European Jew.

Ever since I was about three years old, I have had people telling me I look Indian. When I got mad in fifth grade about being teased about my brown legs, dad told me I was a kickback. When I told a group of black teachers who asked me if I was part Mexican, they understood when I said I was a kickback. In the black community, some people appear white.

Throughout my life, people have approached me and told me about their Indian grandmother. I thought maybe. They had round eyes, I have narrow almond shaped eyes. In my mind, that made me the real thing.  People talk about my high cheekbones. In my family, it was big teeth, a flat butt, long face or a big head of jet black hair. My hair was almost black with a visible redness

The problem with looking Indian is North and South America are vast continents and each Indian group looks different. Add to that the DNA profile used is for Northern tribes. I understand you can download your data and run it through another one and get a more accurate measure of your Native American ancestry. I would do that.

Except, I wonder if they have created a registry to tell you what you may want to hear. I hear that ancestry dna ad in which the woman discovers she is 26% native American promotes sales. Many want to find native American ancestry. Some have a monetary reason. Native American tribes do receive funds due to treaty deals. Slice that pie more and there is less money to go around which is a problem for actual Native Americans.

I remember going to Cherokee, NC with my girl scout troop. There was an Indian man dressed in Plain's Indian regalia who would let you take a picture of him for a quarter. I was 14 and understood what poverty looked like. It was a very sad moment for me. Here I was meeting with my imagined people and they weren't doing very well. 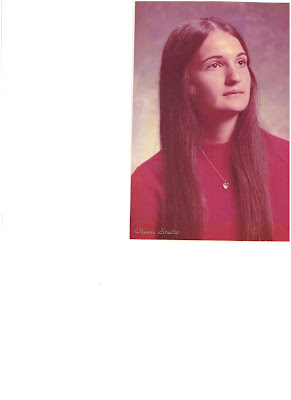 I haven't taken a snooze. Will not be taking a snooze. I will not go to exercise until this evening. So I will soon stomp through the house and ask everyone if they want to eat Captain D's take out tonight or Captain D's take out. What is it going to be. Because a lazy day requires no cooking! Even if my cooking is the speedy deedy sort.

But I'll be up early tomorrow morning. My sleeping late is about as reliable as family stories. But I decided to believe my grandfather was Teddy Roosevelt's personal guard. It sure beats telling people my dad was a member of the civil service. Luckily in elementary school, most of the kids didn't know their dad was civil service too..

This is my senior picture, true story. I'll post a recent picture sooner or later. Have you noticed once a picture ages, it's not that bad.