Americans really like their dogs. I can still picture an older man with his arm around his dog like a girlfriend and talking to it as they slowly drove down a minor highway. The man leaned into his dog as he took a right turn on a small road that would cross a railroad track. This happened easily 40 years ago.

In June of 1997, I purchased a miniature poodle at a yard sale. I was hoping he would be large miniature. He was a small miniature and never weighed over 10 pounds. At the time I had a 90 to 100 pound Golden Retriever mix. I would walk the two dogs. The large dog would want to stop and enjoy the scenery and lay down on me. In time, Mr. 9 pounds would do the 90 pound dog lay down. I humored him some. One night my large dog was at the vets recovering from a minor surgery. I began to walk my small dog at twilight and realized my rural walk was not going to happen. Mr. 9 pounds was not the protection Mr. 90 pounds was.

The world can be a messy, miserable place. I certainly believe "Survival of the Fittest" is the rule versus the exception in the most civilized of countries. I have two mentally handicapped siblings and this is why I moved home and began helping my mother. My big regret is that I did not do so when my father was alive. The year before he passed, I came home for about two days every week. I began working at an evening high school which had a longer day but the luxury of a four day work week. It was a jolly year for us.

My older brother is developmentally delayed. One time he tried to tell me that people were mean to him and he did not like to walk the dogs. A week or so later, I was following him and my sister walking their dogs. As I caught up, the children who were taunting them saw me. They froze in their tracks and rode off on their bikes. They recognized me as a teacher at their school.

There is a sadness you feel that is so very old. My brother's siblings would get into fights to protect this brother. I remember one man coming to our home because my squirt of a brother who was about 8 had taken on his 13 year old child who was easily double my brother's size and threatened to call the law. The fact that they never answered the door when my mother had gone to talk to them about the bullying made me laugh on the inside to witness him practically crying about what my brother had done.  His son was not injured.

I have a sister who developed schizophrenia when she was 19. It is a horrible brain disease. She is quite feisty and people will leave her alone. But there is the other problem which is much worse. It is the isolation of people avoiding her. She is harmless and the medication she takes now has really helped. They say the stigma of mental illness will begin to end as they develop treatment.

It was with great sadness when my other sister had a stroke. She lost a part of herself and man did the predators swoop in. They are still about and it is a big concern for me and the people who love her. She wants to live independently which she manages. But she needs help.

So I see the ugly side of humanity. I think about it when I get older. Will someone step up for me? Heck I don't know if I will live that long. I don't believe in worrying about what has not happened.

But I remember walking my dogs. A big burly man in his beat up truck stops and backs up. He is beaming as he shows me his little white poodle with a pink bow on it's head. I drive down the road and see a working class black man walking a foo foo dog of some sort. Another time and day, I am sitting in a park watching a group of kids walking their dog much that is larger than themselves. This gives me a lot of hope for what goes well in the world.

I currently own nine dogs. Three dogs work as boon companions to my mother, brother and sister that live with me. Three dogs are quite elderly and are pets inherited from one of my brothers who has passed and two from my sister who had a stroke. The final three are mine.

No one sneaks up on our house. My bulldog is probably my crime preventer where I live.  But it is my Chihuahua mix that is going to rip the home invader in half. The bulldog will only participate if that person makes the mistake of trying to hurt her little buddy.  The mother of the chi mixes is a great ratter too. Almost as good as these cats I have.

Today there was a deer in my front yard. It seems to know me and wasn't bothered by my mowing. It looked at me. I looked at it. And the elderly 18 year old 6 pound dachshund barked her head off. I was impressed the dog had located the deer.

My older brother's dog is about 60 pounds and about 17 years old. She is blind and cannot hear. I always have to make sure where she is when I approach the road to fetch the newspaper or mail. My mother fell when I went to my brother's house to pack his things. When the medics came, my sister had put all the dogs but the two old ladies up. Well my brother's dog walks up to them and growls "No entry into my house".

My sister put her up but the medics waited for a law enforcement officer to come. As the medic explained, it is when you try to pick someone up that the dog attacks. They are only defending their owner. As aggravating as it had to be for my mother being delayed in being picked up by a toothless, blind hound; my mother had to call her sister that night to brag on the dog.

My brother's dog does more than just eat. She pees all over the place. But that is another story. 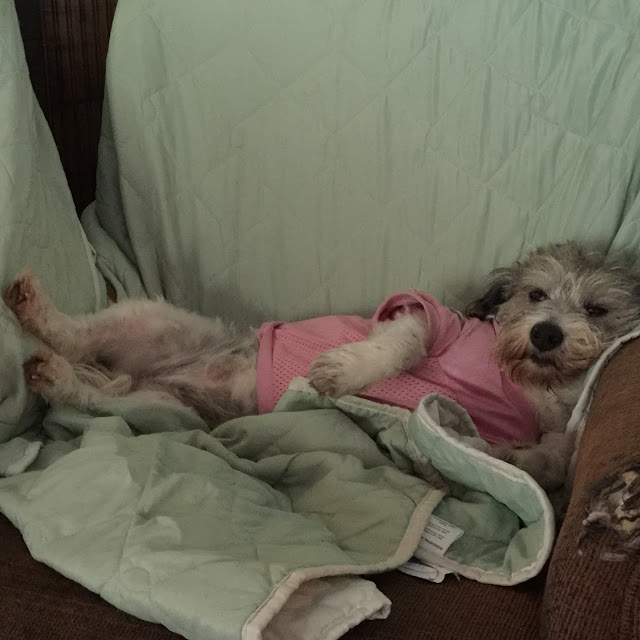