Have a better day tomorrow.

The air is laden with the calmness of rain. It did rain this morning.  Early this morning it drizzled getting into the car and out of the car at each stop of grocery shopping. When I got the last bag of groceries out, it stopped. So much for the heavy rains we were trying to avoid. 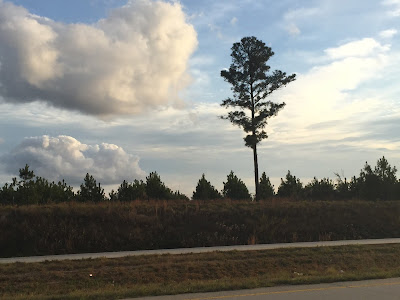 Yesterday, the clouds were fabulous. You had the fair weather cumulus puffs and high cirrus clouds warning rain. Then the dark clouds intermingled creating some serious sky artistry. There was everything imaginable in the sky from lovers to animals frolicking to cherubs on watch with somber eyes as the heavens transformed into rolling waves of dark clouds. 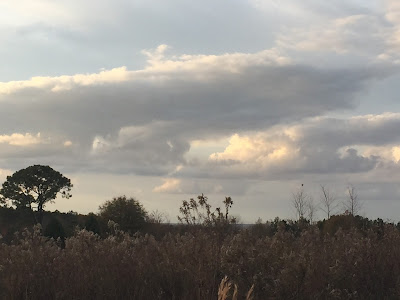 Anyway, tomorrow is going to be glorious. The late, mild freezes and frequent rains have delayed the leaves turning in masse. But tomorrow, the green, golds, reds, purples of autumn are going to be in their glory. I did not get a picture of the whiffs of smoky clouds on the horizon following the path of the Flint River. I've seen them numerous times but they burn off quickly.

President Truman would not put air conditioning in his home in Independence, Missouri. He said God made the weather and he was not going to complain. I was late to using an air conditioner. Once you use it, you never want to stop. I contemplate solar panels for my house so I can have air conditioning if electricity gets too expensive.

Fall, winter and spring are my favorite seasons. I like the summer but the heat makes me lazy. That is my excuse. I've purchased my all access pass for the Macon Film Festival which happens in July.

The news is pretty rough. We had a mass shooting in Savannah Georgia in addition to the tragedy in San Bernardino. Three men were wounded and one woman was killed. I don't know the details. I wonder if we didn't broadcast the news of these events it might cause one of these people to not commit the atrocity. We will never know.

Why would a young couple with everything before them and a 6 month old baby girl do what they did? Didn't they want to care for their child and see her grow up. He would have been insane to think he could have gotten away with it. His wife may not have spoken English or had any means to get away from him. This is why you educate girls. If a mother reads, the likelihood of her child becoming a suicide bomber is very low in Pakistan and the Middle East.

Tomorrow is another day. I hope we all get better news. I'm not afraid of Muslims. They do have different beliefs. But the couple who committed these murders aren't Muslims no more than Mr. Dear who shot up the Planned Parenthood is a Christian. They may have the beliefs but their interpretation is skewed tragically.