I drove through downtown Fort Valley. Under a streetlamp, a cat calmly groomed itself. Getting ready for a hot night on the town. The little downtown goes to sleep early and some of it rests during the days. People go to large shopping centers, malls and strip centers for much of what they need.

Perspective is what I have been stewing about. 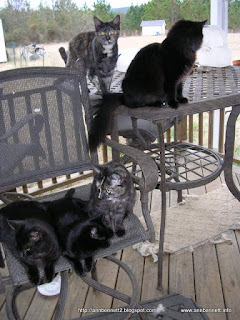 Did you know that in China, to show the bottom of your feet is an insult. No biggie in that many of us will never go to China. If I ever get to China, I may be shuffling my feet due to age. You do slowly lose the spring in your step.

My Euripides moment was, this explains why my mother's doctor walks the way he does. He has obviously lived in the United States most of his life. His children are born here. I don't know his internal feelings nor would I ask him. But I have observed his walk. I wondered why some Asians walk that way and we don't.

One time a man who was of Asian descent with an Asian tour group wondered why I knew they were Americans. I paused. It wasn't the greatest answer but it was the truth. You're all sitting around slouchy like Americans. He laughed. It made sense. They weren't slouchy. It was the body language and interactions.

I had a great Thanksgiving and hope you had one too. I thought of posting my dressing recipe and writing something profound. For me, I am thankful for the life I have. Things can always be better but they certainly can be worse.

I have enjoyed the shows about the first English colony. We forget that the French and Spanish were already working on this continent. One topic discussed in the media is the genocide of Native American people. Disease killed many. Corruption and callousness killed many. It is hard to reconcile that with feeling wonderful you live in the land of opportunity.

But I do. Even though I am registered to vote and do try to have an open mind. I will vote Democrat. I have voted for a few Republicans. My vote counts for nothing in Georgia. There is going to be a rally for Donald Trump in Macon. I have thought about going for the experience. Of course I need a paper bag to wear over my head.

The South is called a racist, misogynist, backward place. I hate to add my face for a camera pan as Trump announces that the Syrian refugees can just eat cake like Marie Antoinette. The civil right's act of 1968 that has additional mandates for Southern states has really improved the economy and life in the South for everyone. Schools were integrated in the early seventies. I like to think of myself as a progressive Southerner.

One big problem we have has always been a problem with politics. It is the stretching the truth.
I have debated how I will register political ads. Will I try to catch as many as I can and make jokes?
Will I be sane and hit mute or fast forward through as many as I can? I will be sane.

I will not go to Trump's rally. I would boo sooner or later. You know they will not let me wear a paper bag over my head. I thought I could wear a hijab. At a Trump rally, that could probably get me killed quicker than a boo.

I can see Trump singling me out and asking me why I can't speak English. I would get nervous and the accent would get thicker. The audience would not know what to do with me. They understood every word. But I got the hijab on. Hell, that roll around my middle is probably a suicide vest. Yep, it would be pandemonium, and the odds would not be in my favor.

I could protest outside. I'm retired from teaching and can have an opinion now.  I would - BUT, I have people depending on me. Whatever heat gets dished on me will get dished on some fragile people. Plus, this is the world I live in. I'll save my fight for a battle that can be won.

The tide will turn. I've lived long enough to see it happen. I pray it will happen before the middle class disappears into the working poor.

I'm thankful for my comfortable life. There are so many things to be thankful for. During stressful times of my life, I would write down what was going well.

There are so many sad things in the world. In the 1800s, the English stopped eating sugar to protest slavery. The connection was made between sugar production and slavery. It is the small things we do that lead to big changes.