It has been a crazy week. Doctor's appointments galore, I bought a new car, grocery shopping, etc. I know you all want to know about the clean-up on aisle nine at the local Kroger. 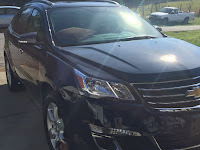 I feel a mixture of pride and sheer terror in getting it paid for. Being able to travel without fear of breaking down is wonderful.

My sister picked the dark blue color of our new vehicle. My dad had a dark blue 1941 Ford he called Willie Maude when he was dating my mother and they first married. The car was lost in a head-on collision with a drunk driver in 1954.

The drunk driver had purchased a brand new car and was celebrating with passengers in the vehicle. The driver was killed instantly. I don't know the fate of the others. My grandmother was killed in my dad's car. My dad was hospitalized and recovered.

Dad had a lot of regret and depression over the tragedy throughout his life. One time, he started to talk about you have guilt when you get older. He stopped immediately. He smiled his jovial smile and said I was too young to hear that. I was about 18. It didn't make sense to me. He was not at fault. Now I know when something bad happens. It is as hard to stop replaying in your mind how things could have happened and avoided the tragedy.

For years I thought my family had contributed to my sister's confused thinking and schizophrenia. I know now we did not understand the problem or the disease. Education has helped us. The weakest link in her health care is her psychiatric treatment. She has Medicare and we use the public facility because they are actually better than private care.

No criticism is intended. Her disease is complicated in that medical treatment was not that great when she was diagnosed in 1983. Medication has improved by leaps and bounds but there is still a long way to go. There is prejudice toward mental illness that many sufferers and their families hide as much as a consequence. We do it too. If there was more of a push toward diagnosis and treatment, there would be much better treatment today. So many would live much more productive lives.

This past week, my sister went to her scheduled appointment. There was a new office worker who told her that she had no appointment and her name was not in the system. My sister's reaction was reasonable. She says, "What about my medicine?" The office worker had the look, I don't care. I knew that it would be a waste to discuss it with her.

I tell my sister, "It's OK, we'll go to the Warner Robins office." She talks to the psychiatrist remotely with a computer screen at the Fort Valley office. I always felt an in person meeting would be better. Besides if we hurry to Warner Robins, we would be on time for the appointment there.

In Warner Robins, we had to wait about thirty minutes. They told me that she was not dropped and to just call Fort Valley to get a new appointment.

It wasn't that easy. I spoke to the same person who said the appointment was canceled and she said she could do nothing for us. We would have to apply for services. I asked to speak to someone above her. I spoke to the office manager. She repeated the same thing. I asked about the medicine refills. She said, she didn't understand why that was a problem.

She started to detour with it was not her fault. I tell her I know it is not her fault. I know better than let the problem become a battle of personalities. She repeats the blank response that she did not know why my sister not seeing the psychiatrist could cause her medicine not be refilled until after she sees a psychiatrist would be a problem. She also tells me that my sister can not see a psychiatrist until late January or early February.

She also tells me that my sister was dropped because she did not return within 90 days of her May 14 appointment. The doctor had given her a six month gap for her next appointment. The earliest they could schedule the appointment was December 11th. I told her we had no control. They made the appointments. If we had been told, we would have come in before 90 days were over.

She does tell me we can come at 8 am and they can possibly work us in to allow her to sign up for services and speak with a therapist. In my mind I am thinking we have to take whatever. My sister's primary care physician would hopefully not let her down. He would understand that coming off her medicine would be difficult for her and these medicines do not always work when you take them, stop and then resume taking them later.

Yes I did rattle the rickety sabre that we will contact an attorney. We are desperate but know one harsh word and we will be kicked out or hung up on.

We are also lucky in that our primary care physician Dr. Michael Early Jr and his nurse practitioner Christina Johnson are true heroes in this world. They are good at what they do and they do take good care of their patients.

We arrive at 7:45 am with photocopies of the original appointment. I give a copy to the receptionist when we apply for services. She gives us a stack of forms to fill out which we do. After turning the forms in, we wait about 15 minutes for their one electronic question recorders. We sit together and fill that out. About 9 or 9:30, we see the therapist.

The therapist gets information from my sister to create a treatment plan.  She is kind enough to say the facility made a mistake. She arranges for my sister to meet with the nurse following her appointment. The nurse does her job.

The facility has the best of people working there. Some policies and the people that enforce them make health care very difficult for very fragile people. I read a notice that if someone is 10 minutes late for an appointment, the appointment is canceled and has to be remade. It is a problem when people are late. However, do they see people promptly. We have sat waiting for several hours.

The nurse directs the receptionist to make an appointment for my sister. The receptionist tells her she can't because she does not have a photocopy of my sister's social security card. The nurse directs her to make it anyway. For the record, she has a photocopy of my sister's driver's license, health insurance card and the actual social security number. We got an appointment for December 31st at 8:30 am in Warner Robins. You could tell she was glad we weren't going to be back there.

The irony is we had not been rude. I did threaten to let an attorney advocate for my sister. I did tell her it was not her we were after, we wanted reasonable, prompt treatment for my sister. This is what the big tragedy for people suffering mental illness. These individuals are blamed or treated as if they did not matter.

This receptionist makes maybe $10 an hours. She is probably happy to have the job and it's benefits. She earns her money. She does not have the personal skills or experience to show some compassion. She has been directed to tell people to leave without appointments.

Insurance does not always address a patient's needs. My mother and I supplement my sister's treatments. My dad paid a $4000 hospital bill in 1983. My mom's rehab for a broken hip was twice as long in the hospital in 2004 and cost $6700 for insurance.

I can't complain in that a mistake was made and there is an attempt to have the problem fixed. When I returned with the social security card at 3:50 PM, there was a sign saying they were closed on that day for a meeting in Warner Robins. I was not told they would leave before the normal 5 PM close time. They do have a lunch time where no one works the reception area.

There is a nervousness the appointment will not happen. I go to the nurse practitioner on Thursday for my own healthcare. I'll mention the problem about Julia to her. We have extra medicine. We get her medications filled as soon as we can and deliberately accumulate extra for situations like this.

My sister and I got back in the car at 10:46 and decided to go home to eat lunch before picking up the new vehicle then deliver the social security card. My brother was thrilled when we picked him up with the new vehicle. He is the first to comment that it looks like the Willie Maude. He loves antique cars and motorcycles.

For everyone who suffers mental illness, it is important to recognize that so many do not get treatment because it is difficult to get. Legally in the United States, we have healthcare facilities that are supposed to deliver services on demand. But having to fill out all those forms and following a set of rules that are demanding for someone like me who has post graduate college degrees may be why that person that scares you is speaking to an imaginary person and not working.