I grew up with a mom that did not allow cussing. She also considered racial comments cussing. While she was at it, so was putdowns. 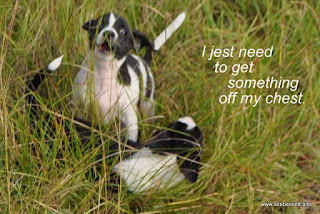 I was close to fifty when I learned the word cussing should be cursing. My mother had talked to one of the supervisors at Happy Hour Workshop for developmentally delayed adults. She noted he called cussing cursing. Bells and whistles went off and another a piece of my dialect disappeared. No worries, I say plenty more.

Drifting through the blogosphere, I came across one blog discussing how curse words should be handled with care.
http://hannahheath-writer.blogspot.com/2015/06/keeping-it-classy-when-is-it-ok-to-use.html

My first reaction was "how sweet" which translate into let's get a little real here. Ironic in that I don't believe in cursing. However, I let words slip. As a teacher, I thought I never cursed. My developmentally delayed brother can be a kid at heart, perennial teenager or the 62-year-old man he is. Pretty much liked all of us.

Cutting to the chase, he laughs at curse words. Well, guess what, I curse a hell of a lot more than I thought. Yeah. I let a mild one rip, on purpose for comic effect. I can't hear you laughing. Of course, that would be pretty weird in that only me and the word processor know my words at this moment.

In retirement, I have to resist the urge to not curse. Crazy, I know. The other thing I wrestle with is that filter we all use with what comes out of our mouth. You know that handy thing we all acquire from having terribly angry folks in our face because of what we slipped up and said.

My worst one was telling a woman that her niece said her boyfriend acted interested in her. She had been talking about her niece's big ego. And that is when I let this jewel or more apropos stinkbomb explode in my face. Young and dumb is overrated.

Anyway, this is my comment on her blog. My question is where does the idea that poor people are more likely to curse. I do know being impulsive, telling people that their significant other has the hots for someone else can lead to a lower income. But crassness permeates all income levels. You can be low income because of life circumstances.

I stopped cursing as a teacher. I've never been big into cursing and the adage that cursing meant you had a lack of vocabulary became more apparent as I have aged. Frankly, cursing is used as a substitute for being able to verbalize your emotions.

As a writer, you short shrift your characters when you give curse words versus what they are feeling or doing. I don't find comedians who curse a lot in their routine as funny as the laugh track that accompanies them.

The last point about characters is that cursing crosses all social classes. Just because someone is poor or uneducated does not mean they curse. I feel the downtrodden get enough knocks without people educated in human nature enriching the stereotype. My mother punished us in the sixties for racial comments as cursing.