While we were eating breakfast the letter was delivered. Missy barked. 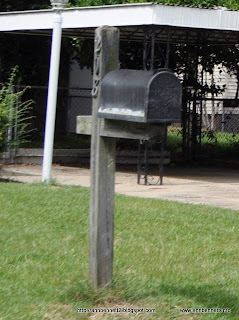 My sister Gail had already opened the door and signed for the letter as I approached.

I hear him say, Thank you Mrs. Gilliam. Dang her hearing is bad.

In slow motion she tears the thread to open the large envelope. "I was letting Missy out and I was face to face with the delivery man."

I wish she would wear her hearing aid. Well might as well see the contents.

"Wonder who would be sending us pictures Linda?"

She drops the bottom section of pictures as she shifts her hand to her cane. I'm older than Gail, but, I am not as broke down. I pick them up. Now we have a little dirt from the floor on one.

I look at Gail. Gail looks at me. Amazing, stuffy Mr. Gilliam,the pictures are obscene.

"I'm going to call the law. Send me trash like this. Who does that old codger think he is?"

I motion for Gail to come back to the table. I take the envelop and pictures and watch her get seated. I tap her hearing aid case.

"I mean damn, I have no interest in him or his naked butt." Gail says way too loud as she puts her right hearing aid in. The giggles slowly start like a reluctant lawn mower engine slowly roaring to life. Little Missy places her tiny paws on Gail's thigh.

"I didn't know they made crotchless pink panties with little boy legs ---- in size big ass."

Tears were streaming from my eyes. Gail was doubled over the table with one picture sticking up, Russell Gilliam, Esquire in a provocative pose with a sexy, silky matching bustier. He obviously shaved his legs. I remember being able to wear pumps like those. They did not look worth a hoot with the pink stockings attached to the pink garters. And who was that woman, it wasn’t Sherry Gilliam.

“I wonder why he sent these pictures.”

He didn’t. I heard the man call you Mrs. Gilliam.

Gail looks pensive at the stack. “Close enough to William don’t you think?”

“That’s right. Your fondness for rhymes has finally come in handy.”

“You certainly looked like you were having fun at the poetry slam.”

“It was nice rubbing up to all those male bodies even if they were gay.”

“Hey Sammy is not gay and he goes all the way.”

We both sit quietly drinking our coffee.as a squirrel works on the squirrel proof birdfeeder.

Is she still alive?

“Yeah, why don’t we give her these pictures?”

“Remember Russell Gilliam saying ‘Faye goes all the way’ as a joke.”

Linda, that was over 50 years ago.

Let’s take the lock off old secrets and shame with these photos. Besides, it is our address on the envelop.