My what big feet you have. 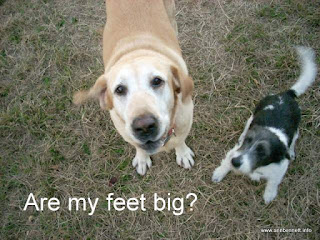 My mom could hardly hide her aggravation with a woman commenting on my big feet in a shoe store. I was about 13.

I learned in high school when people asked me how tall I was to say 6 foot. It took the punch out what happened when I gave my actual height 5'9". Some were conveniently confused when they could not say I seemed taller.

Add that to short and often pudgy girls admiring how small they were compared to me. The most obnoxious one was fat and ugly. I could be equally obnoxious in my own way but I was already at a point where I felt compassion for someone else. Particularly because I truly believed I was gorgeous at the time.

When I taught school I really did not see that many unattractive children. Youth has a beauty of its own. One young man in a ROTC uniform seemed fairly homely until I said something that made him laugh. Its like a curtain pulled, and he was very attractive.

I have a developmentally delayed brother who I bring on to the nail salon. He likes having his feet done. The nail technician points out my feet are bigger than his. Now exactly what do you do with this sort of information. Put it on your curriculum vitae?

I had a mammogram two weeks ago. You basically go into a changing room and put on a hospital gown that ties. I was fairly covered. I thought about thanking them for giving me a larger gown.

During the mammogram, I guess the technician realized I had large boobs. She asks me if I would like another gown to wear in the front when I leave. I said, no. I thought, Did you see my boobs hanging out when I came in? I think not!

As my mother slowly and silently shrinks, I can know the advantage of height. I can also think of much worse things in life, one of them shallowness. I feel blessed with what I do have. Sometimes I see people disfigured, unhealthy, homeless. What happened in Connecticut is quite hard to bear. I can't imagine the pain of the parents of those innocent children. My mother keeps changing the channel to get away from it. I've seen her crying too many times over the tragedy.

My mom worked in a cotton mill in Macon GA in the late 40s and early 50s. The office staff looked down on the millworkers who happened to get larger paychecks than the office workers. She and her aunts who were 5 to 10 years older to her knew the mill was their pot of gold. Not that the work was easy, My Aunt Cleo would slip off from work and go to the movies occasionally. It was hot, arduous work.

One of the straw bosses would walk up to my Aunts and ask them how the weather was up there.

Aunt Cleo had bright orange red hair. One day he made the mistake of telling her how big her feet were.

In front of the same people he hoped to humiliate her she said,
"Mansions are built on Large Foundations. Little Shithouses are built on small ones."