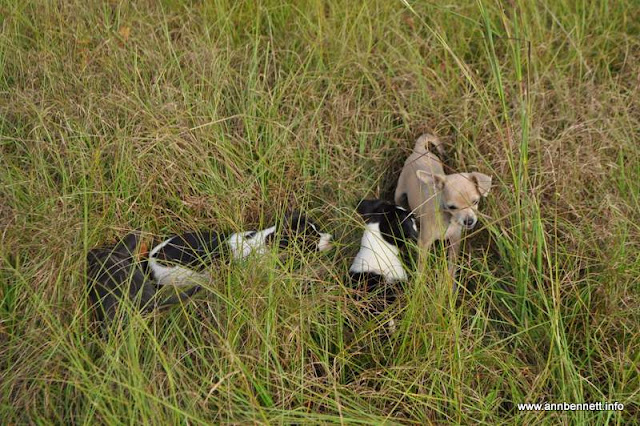 My old timers worked the first shift in my office. Now its the two youngest and the oldest taking their duty. We've had a big dogfight this evening. It's the same fight but its that combination of a large powerful dog and a Jack Russell mix. The Jack Russell has a small injury. Her babies have taken her side. The pit bull doesn't understand why everything is mad at her. I broke the fight up. The Jack Russell is not hurt, just humiliated.

I'm glad she is half chihuahua. It brings a little sanity to a fighting fool. They say you should never leave two Jack Russells together.  I have had to train the babies to hold down the fighting to the death practice of their mother. Picking the yellow one up to break up a fight and two were hanging from that one. The yellow one went to get a better grip on her brother and attached to my arm (ouch). The gray one finally loosened her hold on the yellow one. I have separated the two many times.

It brings me back to an idea I have which is to get rid of the bulldog. Everybody is so in love with the Jack Russell mix. She is such a love. Her babies have all stopped at her dog bed to check on her. She does have a scratch on her ear. The loyalty dogs have. The bigger problem is getting the Jack Russell to stop attacking the other dogs. The bulldog is very gentle. She truly loves the puppies.

I love a gentle giant. Its the size difference and the fighting nature of a Jack Russell that is the problem. I don't believe in breeding pit bulls or powerful dogs. I saw two dogs dumped on Highway 96 the other day. Why did I not get them. I have 9 dogs already. I can't afford the dogs. Its a common occurrence on Highway 96. This is why I am keeping all of the babies. There are more dogs than homes. Looking at the local newspaper I see pictures of small breed dogs needing homes.

I know people wonder why I would even own so many dogs. They are useful. They control vermin which is good in the country. They are good for our mental health. They keep people from just coming up to the house uninvited. At the moment, they are too much work for me. I'm keeping the bulldog. I'll keep the Jack Russell and Bulldog separate. My oldest is a 9 pound poodle who is a warrior in his own right. He's almost 16 and has outlived two large dogs he would get into a scrap with.