It's dog days everyday at my house. I currently manage a pack of ten dogs and five cats. They all love to eat.

At one time, people thought it was because of the bright dog star, Sirius, adding it's heat to our sun. Dog days begins with Sirius rising in the dawn on July 22, 2020. It will end on August 22, 2020. Sirius is part of the Canis Major (Big Dog) constellation which dutifully follows Orion in the night sky.

Now where are the stars during the day. They are still above us in the heavens. We can't see them due to the brightness of our own star the Sun. There are no stars visible with the naked eye or with binoculars during the day. You can see the brightest star in the Northern Hemisphere, Sirius, at dawn and dusk if it is positioned in the night sky for that day of the year. The brightest star in the sky in the Southern Hemisphere is Canopus, the great star of the South. Canopus is never visible in the Northern Hemisphere.

You cannot see Sirius or any other star during the day. You can see the moon, Venus, Jupiter, Saturn and Mars if they are positioned just so and you go out to see them. The moon and Venus are relatively easy to see whereas the other three takes a bit of dedication. Early morning or late evening are best in that the sun is a bit dimmed. There are daytime meteors.

When I was a child, my mother did not like us to skin our knees or have any sort of sore during the dog days. They would not heal. Those of us that live in hot climates and especially before air conditioning know sores heal slowly when it is hot. Rabies which is caused by a virus can be a problem during the summer.

It is important to note that there is a bit of ethnocentrism in the story of Sirius to those of us of European or North African descent. There are a myriad of stories and folklore to religion of other cultures in the world. The official names of all stars are listed by the International Astronomical Union which includes names of stars from cultures around the world.

In checking my facts, I found the following picture which is of "Sun Dogs" which are halos around the sun. This picture was taken February 18, 2009 in Fargo North Dakota. 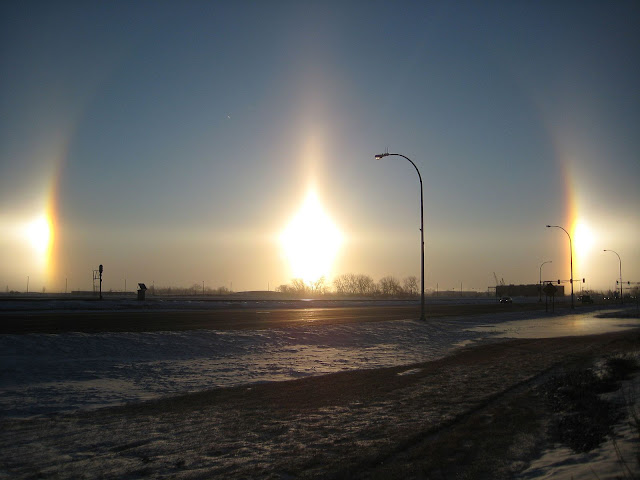